I’m sure like me, many of you will have watched with a sense of awe and wonder at the coverage of the 50th Anniversary of the first landing on the moon by astronauts Neil Armstrong and Buzz Aldrin.  Before this piece goes any further, I should probably say that I’m a bit of a space nut! I’ve sat in the flight controller’s seat in the original mission control, and for the film buffs amongst you, yes I wore the Apollo 13 waistcoat made famous by Gene Kranz in the film of the same name!

This year also marks IOM’s 50th Anniversary.  As part of this, we are publishing a book detailing our history and achievements, and as part of the proofing process, I was reading the book while watching some of the moon landing coverage over this last weekend and it struck me that there were several similarities between IOM and NASA.

So let’s go back to the heady days of the 1960s, a time before the internet, smartphones and satellite TV. It’s worth remembering that in 1969 only 200,000 homes in the UK had a colour TV a very different time indeed.  But with this background of primitive technology, NASA was putting a man on the moon, and the IOM was founded to complete research into lung disease in coal workers.

So here is the first area of similarity.  The Apollo Program and the foundation of IOM were both very bold undertakings at the time.

In 1969, coal was still the primary energy source in the UK. At that time the industry employed around 350,000 workers.  IOM was founded in 1969 primarily, to continue research that had been commenced by the National Coal Board (NCB) in 1953.

Research carried out at Cardiff University in the 1930s had established a link between coal miners and lung disease, specifically coal workers pneumoconiosis (CWP).  This initial study focused on coal mines in South Wales, but it was clear that the problem would be widespread across UK coalfields.  It was as a result of this initial research that the Pneumoconiosis Field Research (PFR) project commenced in 1953, led by the Chief Medical Officer of the NCB John Rogan.

It was an incredibly ambitious research program and recruited some 50,000 coal miners from 25 collieries across the whole of Britain.  The research set out to discover how much and what kinds of dust caused CWP and secondly what environmental conditions should be maintained if mineworkers are not to be disabled by the dust they inhaled during the course of their work.  It required five-yearly assessments, and even by today’s standards, this was a bold and ambitious project.

The Apollo Guidance Computer (AGC) weighed 70 pounds. Programs were literally woven into the hardware by hand — it was called “core rope memory.”

But the AGC was revolutionary for its time. These days, your laptop, phone, and possibly even your toilet have more computing power than the AGC. But this machine was efficient and ahead of its time. Without it, the space program wouldn’t have travelled nearly so far.

It was a similar computing challenge that led John Rogan to persuade the NCB to found a separate independent research institute to oversee the quality of the data collection and to plan and carry out the analyses.

So it was then that in April 1969 as the lunar module made its way to the Vehicle Assembly Building (VAB), where engineers stacked it atop its Saturn V rocket that IOM staff made their way into its brand new purpose-built accommodation in central Edinburgh perhaps with slightly less jeopardy but just as much ambition as the NASA engineers in Houston!

That brings me to the second similarity – people!

It is clear watching, listening to and reading about the moon launch that the technology, the ambition and ultimately the success needed one key ingredient – people! It’s hard to believe looking at the fresh faces around mission control that the average age was only 26.

Over the last 50 years, every part of the space programme has relied on a massive team behind the scenes, and it’s the same here at IOM.  Once established, IOM grew rapidly, and a number of those initial staff are still with the organisation. It’s that retained knowledge and experience that makes IOM such a valuable organisation.  Experience gained in the early days that can be passed down to the next generation of scientists.  In the same way, NASA retains staff from those early days of Apollo.  I was interested to see that astronaut Ken Mattingly the man left behind by the ill-fated Apollo 13 went on to become one of the first Space Shuttle pilots.

Today it’s the people that continue to make IOM the unique organisation it is.  The skillset may have changed, but the commitment to our statement of purpose remains:

“…to improve people’s health and safety at work, at home and in the environment through excellent independent science to create a healthy and sustainable world”.

The third similarity is perhaps less blatant but just as important, but you might not be able to see it!

I have an app on my phone that reminds me at various points during the day that the International Space Station (ISS) is flying overhead! – Told you I’m a space nut!

The National Coal Board (British Coal) established IOM with one primary objective, the study into CWP. Over time, however, it became clear that IOMs involvement with British Coal was likely to be limited due to the decline of the industry and the UK’s diminishing reliance on coal.  Like NASA after the moon landings, IOM needed a new mission.  In 1990 IOM was launched as an independent self-funding charity.

Since then, the organisation has continued to develop new technology and make life-changing discoveries.  There are numerous technologies we rely on today that came out of the space program.  The development of everything from smoke detectors to artificial limbs came from technology designed for the space programme, and like the ISS flying overhead sometimes we forget that.

In the same way, many IOM discoveries and advances are now part of everyday life.  In fact, during our 40th anniversary, IOM received the Presidents Medal for our extensive ground-breaking work on the ergonomics of personal protective equipment (PPE), including studies with firefighters and the protective clothing and other PPE they wore.  IOM research helped change attitudes and beliefs in this area and influenced the modern PPE worn by firefighters.

Even today, we don’t and can’t discuss a lot of our work, but we continue to ensure that workplaces are healthy and safe. Our independent and impartial advice is trusted and relied upon around the world.  Its similar values that took Neil Armstrong and Buzz Aldrin to the moon 50 years ago this weekend.  Like those entrusted with the lives of astronauts in Mission Control, IOM never deviates from the values of independence, integrity, quality and impartiality.  We give the best scientific and evidence-based opinion and results regardless of who is funding the work and whether or not the results seem favourable. This approach has allowed IOM to establish itself as a several, trusted voice valued by Industry, Government and Academia alike.

NASA lives by the phrase ‘explore the extraordinary, every day’, in the same way at IOM we have ‘Science with Purpose’.  Who knows what the next 50 years will bring, but one thing is certain: like the NASA staff celebrating this weekend, IOM staff will continue to push boundaries and look at innovative ways to make our world a better and safer place.  We may not have put a man on the moon, but our last 50 years have been no less extraordinary. Here’s to the next 50! 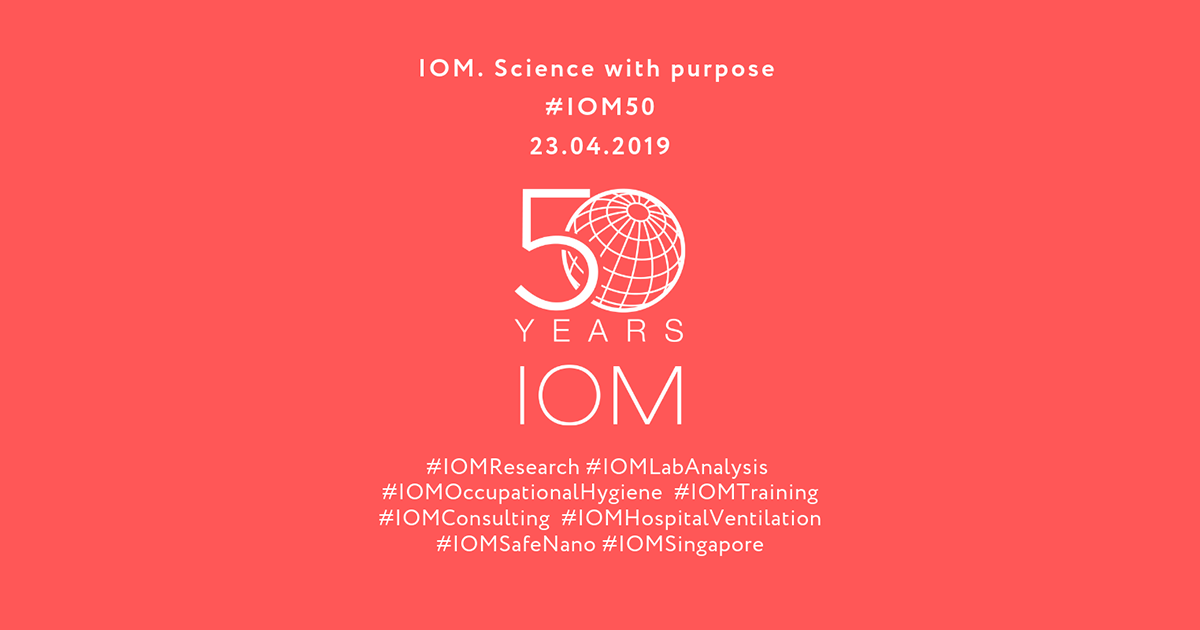