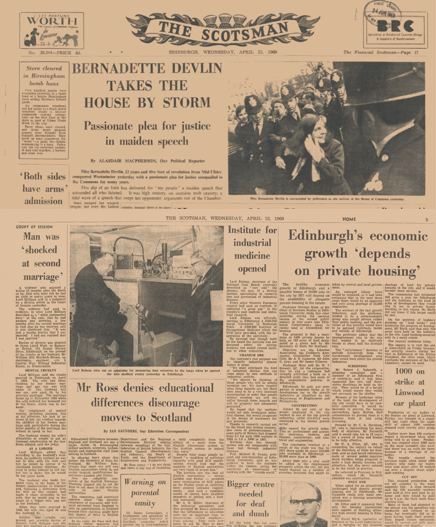 It was on 22 April 1969 that the Institute for Occupational Medicine (IOM) was opened by Lord Robens, chairman of the National Coal Board.

The Institute of Occupational Medicine was founded as a research charity by the National Coal Board, primarily to complete ground-breaking research on lung disease in coal mine workers. Located in Roxburgh Place in Edinburgh original funding started at £200,000.

Lord Robens is quoted as saying "We must anticipate the kind of industrial disease that can come about by new methods of industrial activity."

However, the scope of work and research developed and ergonomic factors advanced, ultimately IOM established a mission to reduce health and safety risks in the industry. The critical research led to an understanding that coal mining not only caused the specific disease known as coal workers’ pneumoconiosis but also to an increased risk of chronic obstructive lung disease, a condition commonly caused by tobacco smoking.

IOM made important advances in understanding how asbestos causes disease, leading to the establishment of methods for assessing possible hazard from substitute fibrous materials.

Following the steep decline of the coal industry in the UK and retracted funding from NCB, survival was in a vulnerable position. To secure long-term survival, our research range expanded and carefully considered a commercial model focused on turning our research into best practice workplace services.

In 1990, we were able to re-launch as a self-funding, fully independent research charity. As well as covering the United Kingdom and Ireland, our work now takes across the world into Asia, North and South America, Africa and continental Europe.

From early 2005, we became a leading player in Europe into collaborative research related to the safety of nano-sized materials. Because of our growing expertise in nanotechnology, SAFENANO was established as a sister company; it was one of the first recognised companies developing the safe use of Nanotechnology.

In 2012, we successfully opened our first overseas office in Singapore. Our presence in Singapore would be a staging post for further expansion in Asia where it was clear that there was a great need for our expertise to improve the prevailing working conditions.

This year we celebrate 50 years of IOM. IOM have evolved and changed in many ways but the two founding questions from our original research on lung disease in coal workers can be generalised as;

It's these two questions that still define our purpose and why we exist as an organisation today.